The face recognition is a technique to identify or verify the face from the digital images or video frame. A human can quickly identify the faces without much effort. It is an effortless task for us, but it is a difficult task for a computer. There are various complexities, such as low resolution, occlusion, illumination variations, etc. These factors highly affect the accuracy of the computer to recognize the face more effectively. First, it is necessary to understand the difference between face detection and face recognition.

Face Recognition:
The face recognition algorithm is used in finding features that are uniquely described in the image. The facial image is already extracted, cropped, resized, and usually converted in the grayscale.

The HAAR cascade is a machine learning approach where a cascade function is trained from a lot of positive and negative images. Positive images are those images that consist of faces, and negative images are without faces. In face detection, image features are treated as numerical information extracted from the pictures that can distinguish one image from another.

We apply every feature of the algorithm on all the training images. Every image is given equal weight at the starting. It founds the best threshold which will categorize the faces to positive and negative. There may be errors and misclassifications. We select the features with a minimum error rate, which means these are the features that best classifies the face and non-face images.

All possible sizes and locations of each kernel are used to calculate the plenty of features.

OpenCV provides the trainer as well as the detector. We can train the classifier for any object like cars, planes, and buildings by using the OpenCV. There are two primary states of the cascade image classifier first one is training and the other is detection.

For training, we need a set of samples. There are two types of samples:

A set of negative samples must be prepared manually, whereas the collection of positive samples are created using the
opencv_createsamples
utility.

Positive samples are created by opencv_createsamples utility. These samples can be created from a single image with an object or from an earlier collection. It is important to remember that we require a large dataset of positive samples before you give it to the mentioned utility because it only applies the perspective transformation.

First, we need to load the necessary XML classifiers and load input images (or video) in grayscale mode.

After converting the image into grayscale, we can do the image manipulation where the image can be resized, cropped, blurred, and sharpen if required. The next step is image segmentation; identify the multiple objects in the single image, so the classifier quickly detects the objects and faces in the picture.

The haar-Like feature algorithm is used to find the location of the human faces in frame or image. All the Human faces have some common universal properties of faces like the eye region is darker than it’s neighbor’s pixels and nose region is more bright than the eye region. 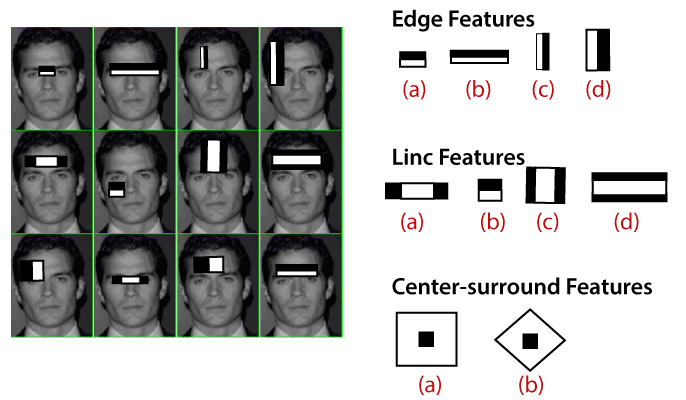 David Hubel
and
Torsten Wiesel
show that our brain has specialized nerve cells responding to unique local feature of the scene, such as lines, edges angle, or movement. Our brain combines the different sources of information into the useful patterns; we don’horizon see the visual as scatters. If we define face recognition in the simple word, “Automatic face recognition is all about to take out those meaningful features from an image and putting them into a useful representation then perform some classification on them”.

The basic idea of face recognition is based on the geometric features of a face. It is the feasible and most intuitive approach for face recognition. The first automated face recognition system was described in the position of eyes, ears, nose. These positioning points are called features vector (distance between the points).

The face recognition is achieved by calculating the
Euclidean
distance between feature vectors of a probe and reference image. This method is effective in illumination change by its nature, but it has a considerable drawback. The correct registration of the maker is very hard.

The face recognition system can operate basically in two modes:

It compares the input facial image with the facial image related to the user, which is required authentication. It is a 1×1 comparison.

It basically compares the input facial images from a dataset to find the user that matches that input face. It is a 1xN comparison.

There are various types of face recognition algorithms, for example:

Each algorithm follows the different approaches to extract the image information and perform the matching with the input image. Here we will discuss the Local Binary Patterns Histogram (LBPH) algorithm which is one of the oldest and popular algorithm.

Local Binary Pattern Histogram algorithm is a simple approach that labels the pixels of the image thresholding the neighborhood of each pixel. In other words, LBPH summarizes the local structure in an image by comparing each pixel with its neighbors and the result is converted into a binary number. It was first defined in 1994 (LBP) and since that time it has been found to be a powerful algorithm for texture classification.

This algorithm is generally focused on extracting local features from images. The basic idea is not to look at the whole image as a high-dimension vector; it only focuses on the local features of an object.

Let’s understand the steps of the algorithm:

1. Selecting the Parameters:
The LBPH accepts the four parameters:

Note:
The above parameters are slightly confusing. It will be more clear in further steps.

2. Training the Algorithm:
The first step is to train the algorithm. It requires a dataset with the facial images of the person that we want to recognize. A unique ID (it may be a number or name of the person) should provide with each image. Then the algorithm uses this information to recognize an input image and give you the output. An Image of particular person must have the same ID. Let’s understand the LBPH computational in the next step.

3. Using the LBP operation:
In this step, LBP computation is used to create an intermediate image that describes the original image in a specific way through highlighting the facial characteristic. The parameters
radius
and
neighbors
are used in the concept of sliding window.

To understand in a more specific way, let’s break it into several small steps:

4. Extracting the Histograms from the image:
The image is generated in the last step, we can use the
Grid X
and
Grid Y
parameters to divide the image into multiple grids, let’s consider the following image:

5. Performing face recognition:
Now, the algorithm is well trained. The extracted histogram is used to represent each image from the training dataset. For the new image, we perform steps again and create a new histogram. To find the image that matches the given image, we just need to match two histograms and return the image with the closest histogram.